Let’s be real,  a seemingly endless array of content is posted daily, but what makes online and social media content viral?

Some content seems to immediately catch the attention of the whole world and go viral.

Before you know it, the content has been shared and re-shared by hundreds, thousands or even millions of people, sometimes within only a few hours.

If you have an online business, there's no doubt you want to be one of those whose posts go viral, since this will get you and your business known to potential customers everywhere, generating profits that might blow your mind.

But as to why some online and social media content goes viral while the majority does not, it is no accident.

To make your social media content the next hottest thing across the internet, here are some things that factor into making online content viral on social media.

When someone views something online, statistics show it will take no more than 3 seconds for them to decide if they want to stay where they are or move on.

Since this decision is so instantaneous, using sleek branding, visuals and colors has been shown to be an important factor in making the social media content viral.

In fact, color contributes as much as 60 percent to whether or not someone likes your content.

However, having one sleek visual isn’t enough. You need consistent and cohesive content that stands out, is visually appealing and instantly recognizable.

Also, a study of 100 million Facebook posts showed viewers were twice as likely to share content that contained at least one image, than that which had no images.

For example, it took me 5 years to build @livestreamkatya on Instagram (my original account) to 7777+ followers, while it took me 5 months to build @theofficialkatya (my new account) to 8000+ followers - all because of the upleveled branding and sleek visuals that keep my audience’s attention on my account for longer. 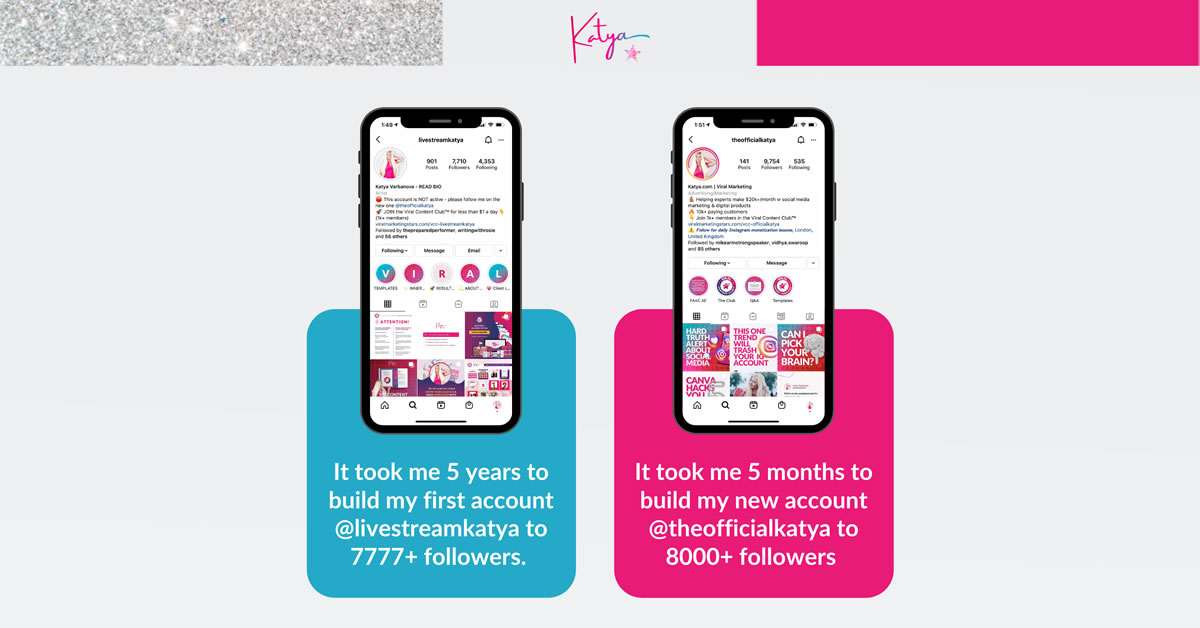 Perhaps more than anything, your online and social media content will have the best chance of going viral if it evokes various emotions within people.

While you think this can include anger or sadness, studies show positive content that makes people laugh, be amused, or be in awe of someone or something is much more popular.

For example, my first viral video, The Confessions of a Gurupreneur, which today has over 1m+ views on Facebook, is a simple parody video that role plays some of the sleazy tactics that happen in the entrepreneur industry.

Therefore, if you can create social media content that surprises viewers and gives them something that is fun and completely unexpected, your chances of having online content that's viral greatly increases.

The Power of Influencers

Unless you have been hiding under a rock or in a cave the last decade or so, you've probably heard all about online influencers.

These seemingly ordinary people, such as Seth Godin or Amy Porterfield  among others, have a knack for promoting various products and services found in their social media online content.

Once they do, the sky's the limit for how viral their content can go on the internet.

If you think this can't happen to you, you're wrong.

My Confessions of a Gurupreneur viral video gained 100k+ views in 48 hours organically at a time when I only had 2k likes on my Facebook Page.

My clients Lenka Lutonska and Selena Soo also had incredible results with a viral video for their launch, following the same viral content strategies. 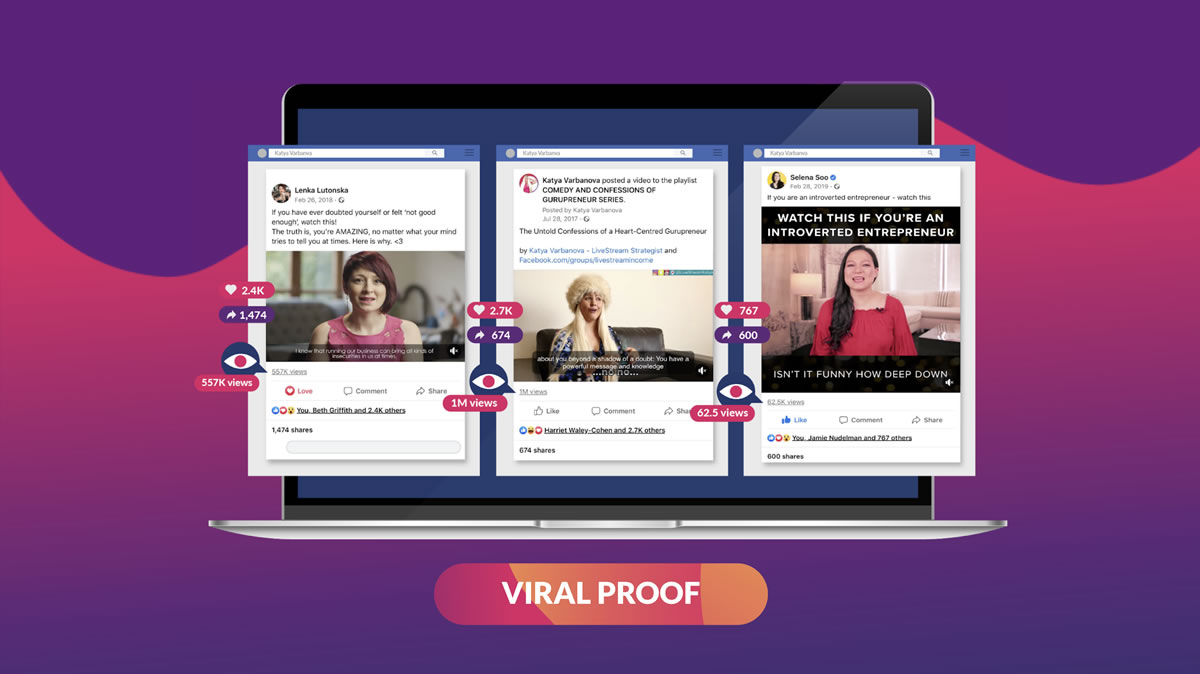 In fact, you may actually be able to involve an influencer and their audience in the creation of your content.

By reaching out to them, you can get a quote and almost certainly see them share or retweet your content.

If you've always wondered what motivates people to share online and social media content, much of it centers around the fact that they think they will look good at doing so.

In other words, many people think they will be liked more by the "cool kids" if they share or re-share certain online content.

Because of this, you should concentrate on creating social media content that makes those viewing it believe that they will look smart, cool, altruistic, trendy, or all of the above if they send it on to others.

Build Trust with the Viewer

This is a longer term strategy but when people read something online, they love it when they know the content was created by a real person to whom they can relate.

If you want to build up a level of trust with customers or others, show your face through photos and videos. If you do live streams, that’s even better.

In doing so, your viewer will begin to like and trust you, and probably feel as if they actually know you.

Once this happens, you may soon see your online content being featured as the next great viral video or social media post.

When it comes to blog content, with much of the online content that goes viral today, it does so because it has been able to secure backlinks from sites that are considered to be extremely authoritative.

These types of sites, which usually include results from surveys or articles that contain plenty of data, can help your content get very popular in a hurry.

While you may assume making your content full of so much information will be a massive undertaking, it is not.

Using free survey tools found online, you can quickly get the information you need and be one step closer to becoming a viral sensation.

A Catchy Headline or Hook

If you've paid attention to the things you read and look at online, you'll soon realize what probably got your attention initially was a catchy headline or hook that made you curious to learn more.

It’s not about creating clickbait, it’s about making sure the promise in your headline ACTUALLY delivers on the promise, yet it’s scroll stopping enough.

Since a headline / hook can make or break any story, you should pay close attention to this when creating your social media content.

If you don't consider yourself to be creative enough to do this yourself, don't worry.

Instead, you can find plenty of blog post title templates or proven viral posts (or templates) on social media & online that can serve as inspiration.

While you may think you know your audience, chances are you don't know them as well as you may think (or your competitors understand them better than you).

If you want to really trigger the emotions you need to get your content to go viral, you need to dig deeper and deeper to know what makes your audience tick.

As to how you can do this, making excellent use of analytics can give you information that more than scratches the surface.

For example, analytics can tell you what people want to be like, where they hang out the most, what they buy and why they buy it, and much more.

Conducting video interviews with your most loyal customers and then extracting the golden snippets to create content from that, can skyrocket your audience growth and make your online content go viral in no time.

Though it sounds like you'll need to become a psychologist, putting in the time and effort can pay off in a big way.

Longer Can be Better

But surprisingly, this isn't necessarily true.

Despite today's fast-paced digital age, online content that is between 3,000-10,000 words actually gets shared far more than content that has 1,000 or fewer words.

However, you may need to rethink your strategy if obtaining high visibility is your primary goal.

Thus, though shorter content is shared less frequently, there is far more of it online, which may help you in the long run.

Don't Be Shy, Be Interactive

Since your goal is to get your online business known to as many people as possible, don't be shy with your social media content.

Instead, create content that is very interactive with your audience.

In the Viral Content System™, we call this type of content CONVERSATION content. And its entire goal is to generate engagement. Because the more engagement you have, the more the algorithm shares your content to others, which creates virality. 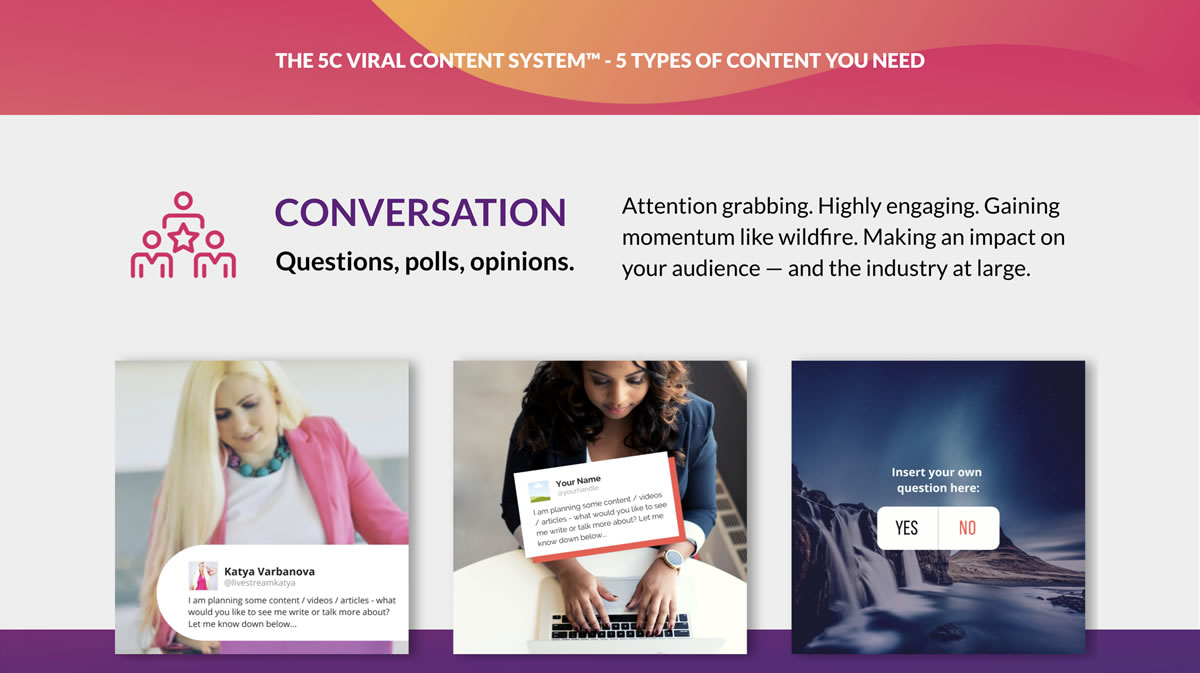 In many cases, interactive quizzes, conversation starters, and simple polls are social media sensations, since they offer people the chance to not only talk about themselves, but then make them eager to connect with others.

Now that you know what it takes to make online content viral, it's time to get busy creating that catchy headline, posting that stunning graphic, or including that jaw-dropping statistic that will make everyone want to tell others about you and your business.

Want To Eliminate Years Of Trial And Error With Your Online & Social Media Content And Get 100 Tested And Proven Viral Content Templates™ That’ll Help You Generate Engagement, Grow Your Following And Boost Sales?

I’ve done all the hard work so you don’t have to. Just use what I’ve already built to generate 1k, 10k, or even 100k engaged superfans and relax…
Learn more here 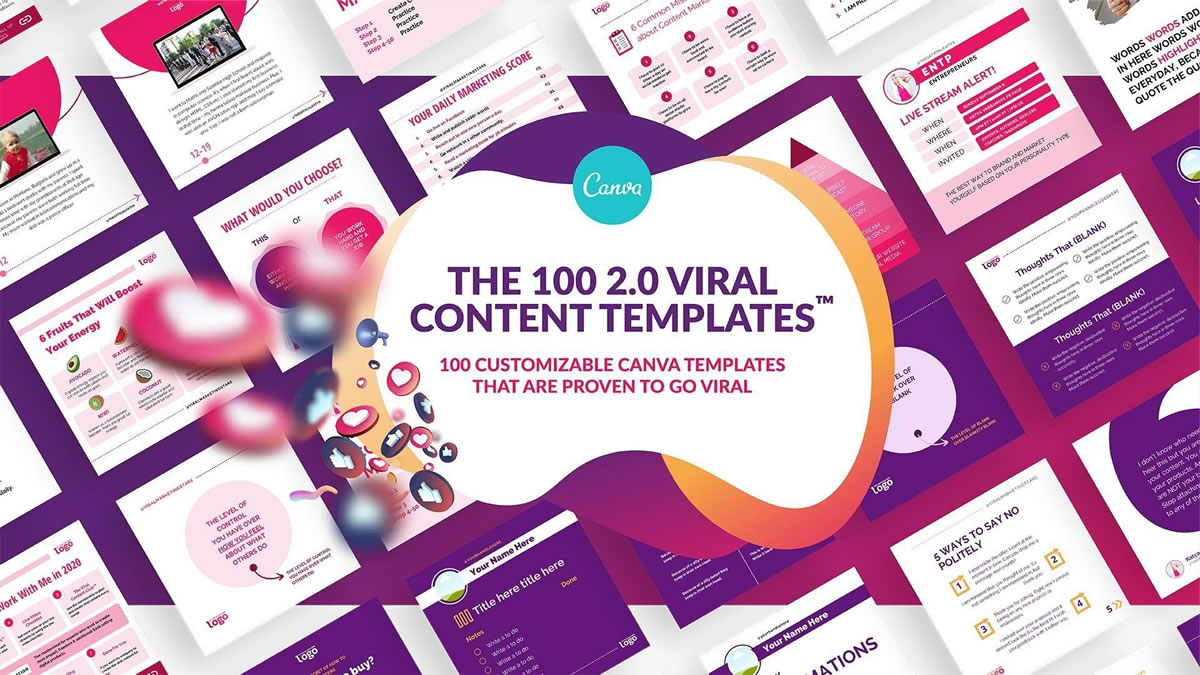 Known as the Viral Marketing Queen, Katya has helped over 10k+ customers grow and monetize their social media since 2015. With an innovative approach for marketing, branding and design, Katya is on a mission to help 1m+ entrepreneurs make their message famous using a combination of organic and paid strategies. 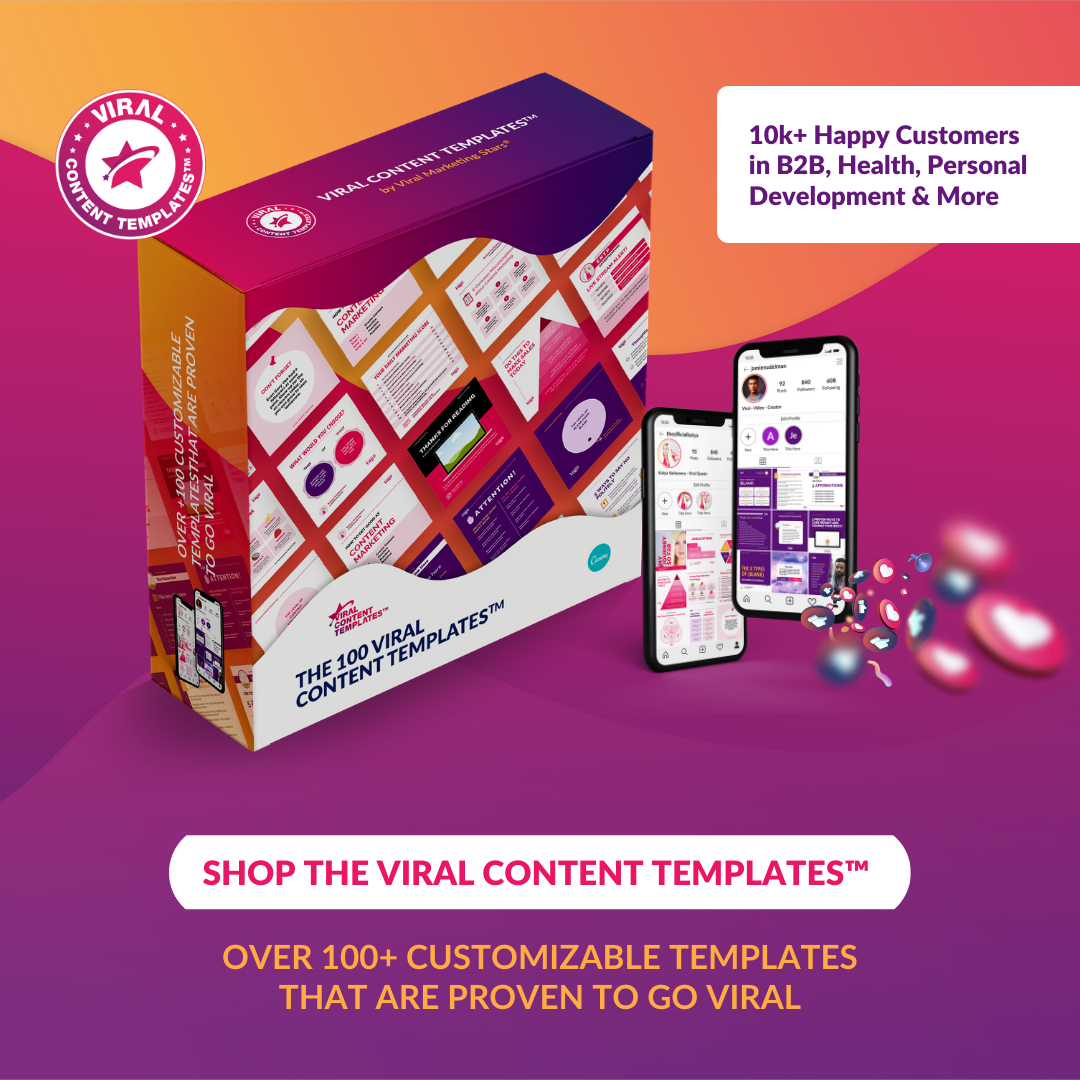 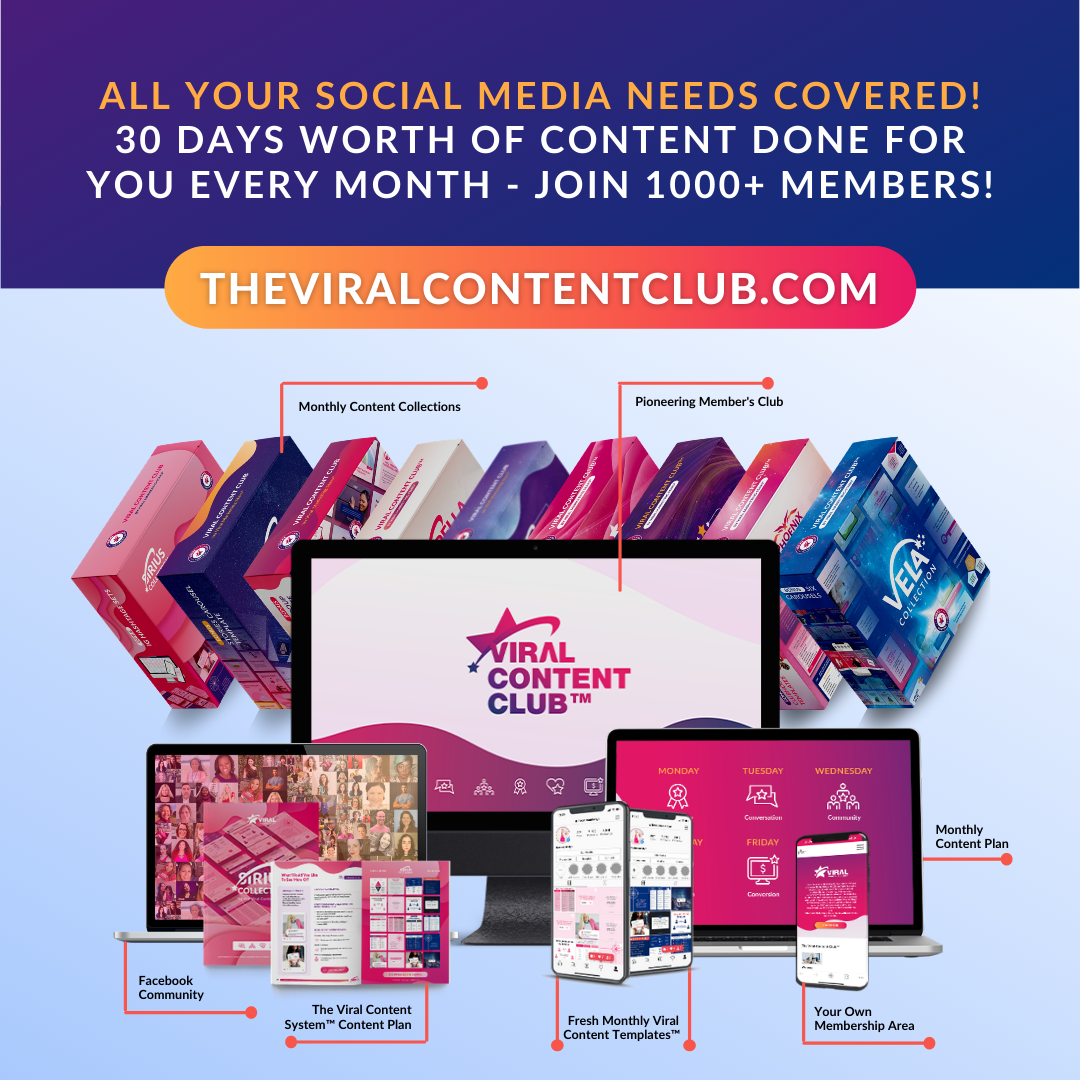